It was in December 2013 that Cyndi Hasenstab felt a lump in her right breast. She was on a ski trip with her family, and the day after Christmas she discovered the lump. Her doctor’s physician assistant thought it could be a fluid-filled cyst but wanted to have it looked at. 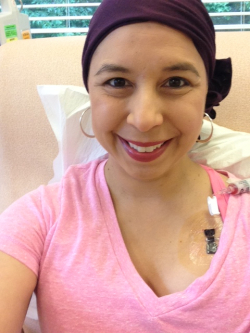 Cyndi had a diagnostic mammogram that was unclear because of scar tissue. So she was referred to James Clanahan, MD, FACS, at Lincoln Surgical. Friends and family recommended Dr. Clanahan based on their experiences with him.

Dr. Clanahan performed a breast biopsy, and the lump was cancerous. Cyndi was diagnosed with stage 3A invasive lobular breast cancer.

Dr. Clanahan called Cyndi at 7:45 p.m. on February 3 to give her the news. Two days later she was sitting in a conference room at Lincoln Surgical to discuss her options.

“His staff was wonderful,” Cyndi said. “The office manager gave me a hug and said she was sorry I have to go through with this.”

“It was very treatable,” Cyndi said. “He gave me my options and said I could either have a lumpectomy or I could have the one breast removed or both with reconstruction. He explained that we would be working as a team, and I’d have an oncologist; I’d see a plastic surgeon, things like that.”

“He was very kind through the whole thing,” Cyndi said. “He explained everything and said that it would be about a yearlong process. I’d have to have a port put in, and there would be chemo involved. So I chose to have the bilateral mastectomy with reconstruction.”

Cyndi told Dr. Clanahan which oncologist she wanted to see, and Lincoln Surgical took care of everything from appointments with oncology to scheduling the port surgery. “I didn’t have to worry about anything,” she said. “It was wonderful.”

Did she ever consider receiving treatment in St. Louis? “There was no reason for me to go to St. Louis,” Cyndi said. “I felt confident in the treatment options we have here.” Dr. Clanahan and the entire team were very thorough and looked at multiple treatment options to ensure every cancer cell was gone.

There was no reason for me to go to St. Louis. I felt confident in the treatment options we have here. Dr. Clanahan and the entire team were very thorough. —Cyndi Hasenstab 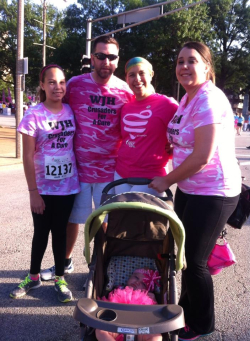 After surgery, chemotherapy, and radiation therapy, Cyndi is cancer free. She will be having the second part of her reconstructive surgery, removing tissue expanders and having implants put in, performed by Vidya Shankaran, MD, Lincoln Surgical’s new plastic surgeon.

Cyndi, 44, is not only a survivor, she’s a wife, mother, grandmother, and eighth grade special education teacher, among other things! In fact, when she returned to school after her last radiation treatment, almost the entire junior high (about 400 kids) was dressed in pink to show their support for Cyndi!

Learn more or schedule a consultation with Lincoln Surgical today!