Father Radtke was first diagnosed with melanoma on his arm in 2010 while living and working in Joliet, Illinois. 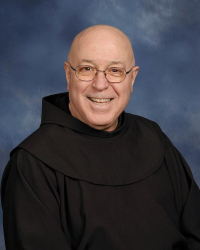 "It was almost like a rash, but it wasn't. It was itchy, and finally I remembered to ask the doctor about it," Father Radtke said. After seeing the dermatologist and having a biopsy done, Father Radtke found out it was melanoma. After surgery to remove the melanoma at Northwestern University Hospital in Chicago, Father Radtke started getting periodic checks from his dermatologist.

In 2013, Father Radtke moved to East St. Louis to work as associate pastor at Holy Trinity Parish in Fairview Heights and St. Stephen's Church in Caseyville. While there he kept up with his periodic visits to the dermatologist. Two weeks after being diagnosed with multiple myeloma in January 2015, at the age of 77, he found out he had melanoma again. This time it was on his back.

Although the dermatologist expected to find a black tumor, the biopsy showed that it was pink, exactly like Father Radtke's first diagnosis. Again, surgical removal was required, and Stacy Stratmann, MD, FACS, of Lincoln Surgical Associates performed the operation.

"Melanoma is a skin cancer, and a potentially invasive one, so you have to treat it like a real cancer and get wide margins and sometimes sample lymph nodes," Dr. Stratmann said. In Father Radtke's case, Dr. Stratmann removed both the melanoma and the sentinel lymph node on his left side. Because the lymph node was negative, Father Radtke didn't have to go back for further treatment of the melanoma. However, he is at an elevated risk to be diagnosed with melanoma again, so he sees his dermatologist every three months.

​​As for working with Dr. Stratmann, Father Radtke commended her on an excellent job communicating with his oncologist. "By the time I got to see Dr. Stratmann, the first thing she told me was that she had just made an appointment to talk with my oncologist the next day."

When I came home from the first visit with her, I was just awestruck. I really was. —Father Fred Radtke

As a priest for the past 48 years, Father Radtke typically uses the word "awesome" only in reference to God; however, he said, "When I came home from the first visit with her, I was just awestruck. I really was."