From 2009-2014, Cheryl Draves was being closely followed by Lincoln Surgical Associates for left lobe thyroid nodules after having previously undergone right lobectomy for benign disease. 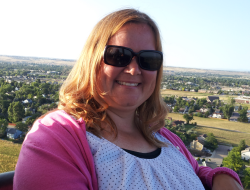 “Because of the atypical cells, Dr. Stratmann suggested removing the left side of the thyroid rather than continuing to get the biopsies and ultrasounds," Cheryl said. Cheryl had started taking thyroid medications in April 2014, which played a part in her decision to remove the thyroid.

Lincoln Surgical’s James Clanahan, MD, FACS, performed the initial lobectomy in 2009. “My first surgery experience was so great with Dr. Clanahan that I knew if I needed surgery again it would be with Lincoln Surgical,” Cheryl said.

thyroid and parathyroid surgeries a year, you can entrust your patients with Lincoln Surgical’s thyroid surgery expertise.

“Dr. Stratmann was a great doctor,” she said. “She explained the surgery and how the post-op care would work.”

“My surgery was on a Thursday, and Dr. Stratmann called me the following Monday to let me know it came back as cancer,” Cheryl said. “It was nice to know that I didn’t have to wait long. I’ve heard of places where you have to wait longer to get your results.”

After finding out the thyroid was cancerous, Cheryl met with an oncologist who—based on the size of the cancer—did not recommend further treatment.

Cheryl had an excellent experience with Lincoln Surgical, complimenting the team’s bedside manner.

When the surgery was complete, her parents, boyfriend, and friends were an important part of Cheryl's recovery. "I couldn't have recovered as quickly as I did without their help," she said.

Cheryl chose to have all her procedures done in Belleville because it was close to her Fairview Heights home. Although she was told she could get a second opinion, she entrusted the Lincoln Surgical team with her thyroid care.

They were encouraging, honest, and very calming considering the news they were giving me. Even though it was major surgery, they do it all the time. I felt confident in both of the surgeons’ decisions and how they handled everything. —Cheryl Draves

To celebrate being cancer free, Cheryl and her boyfriend Kevin took a trip to Europe to visit her brother and his family in Spain and went sightseeing in Switzerland. She also made sure to visit the Eiffel Tower, which had been on her bucket list for a long time.